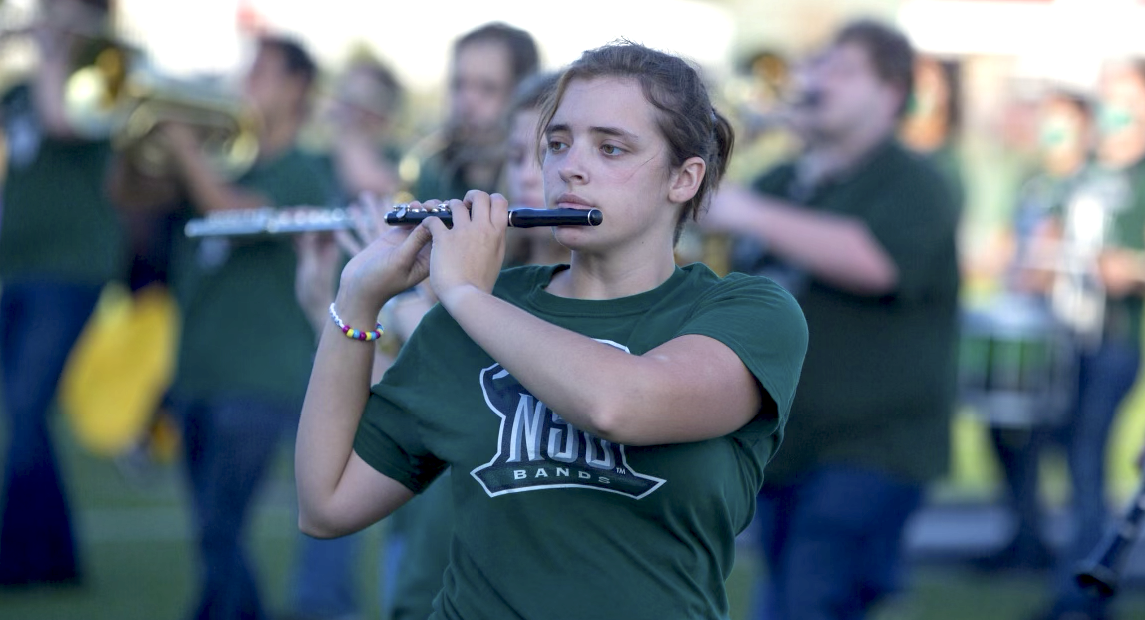 The start of a new school year is upon us and with it the return of (hopefully) a real football season, complete with marching bands. And that’s where we meet Northeastern State University junior Cassie Coleman who says she really found herself when she decided to become a RiverHawk and get involved in the school and the Tahlequah community.

In her senior year at Locust Grove, Cassie applied to several colleges, but it was a visit to NSU that really helped her decide.

“I went to RiverHawk Jam that fall and learned a lot about the school and I met the band director and some of the students. They took us to a football game and I saw the band perform and that really inspired me to go with Northeastern State,” said Coleman who plays the flute, piccolo and clarinet in the marching band and in the NSU Wind Ensemble.

She started at NSU not quite sure what she would study until she got a break.

“I started off in a pre-med track but in the spring of my freshman year I got a chance to work with the Tahlequah schools and teach a sixth-grade flute class and that’s what led me to decide to major in music.”

In addition to her music endeavors, Cassie is also a RiverHawk Ambassador where she meets with prospective students and shows them around campus.

“NSU is the perfect size school and there’s always something going on downtown or on the (Illinois) river. The professors get to know you and you’re not just a number. When I first came here, I was pretty shy, but getting involved in band and all of these other activities really brought me out of my shell and now I just talk and talk and talk,” laughed Cassie. “When I visit with prospective students my advice to them is to come and get involved in the school and community and you’ll be glad you did.”

As Cassie looks past NSU, she says she wants to get her master’s degree at least and teach music.