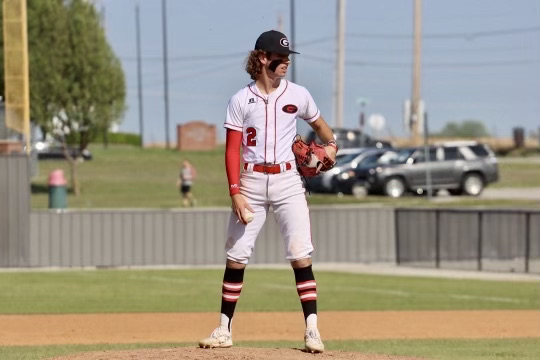 Motivation is a key part of achieving success. And it does not matter if you are someone in the business world or a high school student-athlete, there are things that motivate you to help you get your job done. Alex Oliver says that he wants to prove to others that he is an outstanding athlete.

“The want and the need to be the best I can are what motivates me,” he said. “Proving to my family and friends that I can be amazing motivates me like nothing else. I try to take the positives out of every situation, learn from them, and implement them to have success.”

Oliver is a senior at Grove High School. He plays pitcher and left fielder for the Ridgerunner’s baseball team. Out of all the teams he and his teammates compete against, Oliver says that there is one that he looks forward to the most.

“My favorite team to play and beat would have to be the Jay Bulldogs,” he said. “I know a lot of people from there and earning those bragging rights always feels really good. It also makes for a good rivalry.”

The teammates that he competes alongside are also an important part of Alex’s success. They have helped him grow and become the player that he is.

“In practice, Duncan Highley and I love to make everything a little competition and I think that helps to bring us success on the field. Someone on our team that has really shown up this year is Taylor Lee. His pitching has improved immensely and his appearances from out of the bullpen are a big part of our success this year.”

Outside of sports, Alex has found a very important group to be a part of that helps the town of Grove.

“I’m not involved in too many clubs,” he said. “But one of the most important one is being a board member of Grove Interact. Being able to raise charity, put in community service, and gather countless important items for needy people is an amazing feeling and makes you feel like you’re really making an improvement in the lives of other people.”