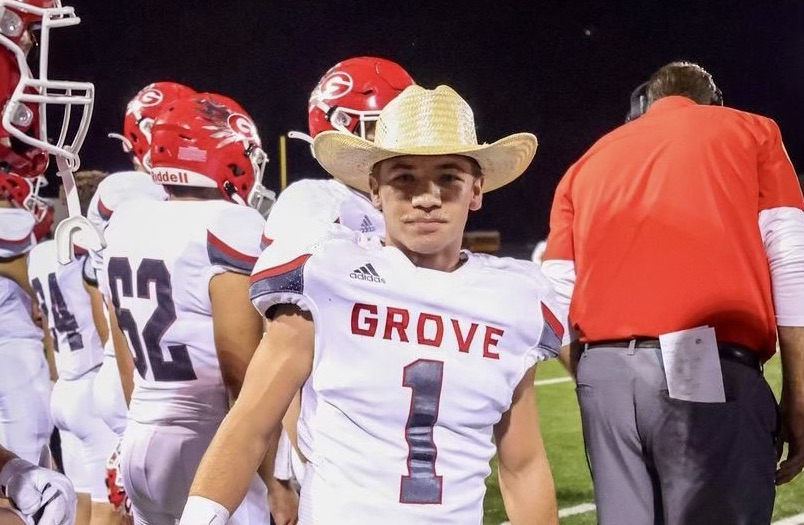 Gavin Stone is a multi-sport athlete for the Grove Ridgerunners competing in football, powerlifting, and tennis. He and his teammates have played against a number of schools, but Stone says that there is one team specifically that he enjoys going up against and beating the most.

“The opponent I enjoy beating the most is Wagoner in tennis,” he said. “Every time we play, it is a very long and exciting match. They are a good team and that is what makes it more enjoyable.”

Success is something that Gavin, a junior, has worked for since he began playing sports. While he knows the work pays off, he also has some special motivation.

“It has taken a lot of hard work to get where I am today,” he said. “I have also had to be dedicated to my sports and make sacrifices when necessary. My family and Jesus are the biggest motivators for me to work hard because I want to make them proud of me. The biggest role model in my life is my dad. He shows me every day how to love and provide for your family and how to show Christ through my actions.”

Gavin and his teammates work together to make each other better athletes. He says that there are a couple of guys that he enjoys going up against the most.

“The teammate I battle with the most on the football practice field is probably Brayden Casey,” he said. “Mainly because we both fly around and go for tackles. On the tennis court, I would say it is Zach Draper because he is a good freshman player and who wants to get beat by a freshman.”

Throughout his athletic career, Stone has experienced some memorable moments, but he says that there is one moment that he enjoyed the most.

“I think the highlight of my career so far was beating Bristow in football this season. Coming into the game, we were 6-0 and they were 5-1 and we beat them 34-28. It was a great team win.”