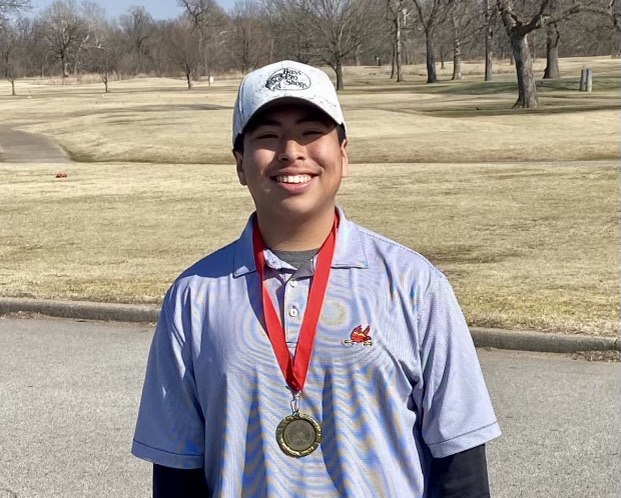 There are moments in an athlete’s career that stand out for a number of reasons. It could be a championship, a victory over a certain team, or a personal milestone. Nonetheless, the moment is something that is special to the athlete. Nathaniel East says that he had such a moment early on this golf season.

“I was competing in my first tournament of the season,” he recalled. “I made an eagle on a par five-hole. It was my very first eagle ever and it was absolutely amazing. My dad, grandma, and my girlfriend were all there to witness it. It was a really great moment.”

Nathaniel is a junior at Grove High School. Along with being a member of the golf team, he is also a high school sports broadcaster. They stream football, basketball, soccer, wrestling, and baseball. He is also involved in Character Counts and drama.

Though golf is considered an individual sport there are still teammates. And East’s favorite moment was getting some revenge for one of his teammates.

“There was an opponent that beat one of my teammates in a playoff tournament,” he recalled. “I happened to get paired with him the next tourney and I wanted to avenge my bro. I ended up beating him in a scorecard playoff. I’m so glad it happened the way it did. Something that I won’t forget.”

Throughout his career, Nathaniel has put in countless hours of practice working hard to become the best golfer he can be.

“You have to be motivated to be good at something,” he said. “That comes with sacrifice and time. In order to be the best, you have to have the right mentality and the right state of mind. Whatever I do, it’s for the Lord. I know that I cannot do anything without Him. My parents have also been very supportive of me as well. They motivate and push me hard as well.”

Though he is just a junior, that does not stop East from looking ahead and seeing what might be in store for him.

“Golf is what I want to pursue as my career,” he said. “A professional broadcaster is my second pick in my career if golf doesn’t work out. We will just see what God has in store for me.”