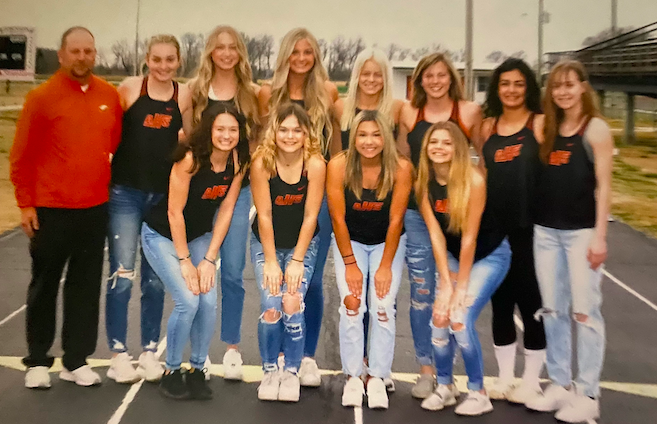 At the halfway mark of the season, the Lady Eagles track and field team has some of the best talent in Class 2A. Four meets into the season, Afton has finished in the top three in three events with several individual winners throughout those meets in Catoosa, Chelsea, and Miami.

Leading the young Afton girls track team is junior Kat Osterberger, who is a returning state qualifier in the 800m run, 4x200m, and 4x400m relay teams. Osterberger was one spot away from placing in the 800m run as a sophomore last season. She also competes in the long jump, 200m run, and on the 4x800m relay team.

Another one of coach Bobby Shinn’s top performers is underclassman Summer Murry, who competes in the 400m run, 800m run, and is on three relay teams this season. As a freshman last year, Murry qualified at state for the 400m, 800m, and the 4x200m and 4x400m relay teams.

Joining Murry and Osterberger on the three relay teams are junior Madalyn Griswold and sophomores Chandler Ervin and Johnni Jones. Erwin and Griswold also compete in the 200m dash, where they are favorites to qualify in for state this season.

Another underclassman Shinn is excited about is sophomore Delani Johnson, who competes in the high jump and shot put.

The Lady Eagles have one regular season meet left before heading to Stroud for regionals followed by Catoosa for the state meet. Shinn is excited about this season and for the future of Afton track and field as the current team holds seven school records and is top five in 13 different events.