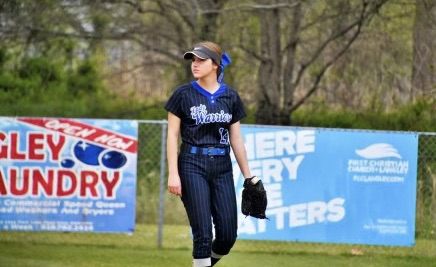 Success is something that is rarely achieved alone. It does not matter if it is in the business world, sports world, family life, or something else, usually along the way there have been those that assisted or played a part in the success that was achieved. Abbie Schlatter says that the success she has experienced has been due in part to some people that have played a big role in her life.

“The biggest influences in my life are my softball coaches,” she said. “Coach Rogers, coach Smith, and coach Hartsock all push me to be my best on and off the field. They have also been good mentors to me during my time at Ketchum.”

Abbie is a senior at Ketchum High School. She focuses her main attention now on fast-pitch and slow-pitch softball, but in the past, she has played volleyball, basketball and cheered.

Throughout her athletic career, Schlatter has competed against different schools, but she says that there is one school that she enjoyed beating a little more than the others.

“The opponent I enjoy beating the most is Chelsea,” she said. “They have always been a good competitor and Ketchum hadn’t beat them for a while until the end of the 2021 fast-pitch season.”

Schlatter says that she enjoys playing alongside all of her teammates but there is one that she has developed a great bond with.

“The teammate I battle most with at practice is Kenzie ‘Buzz’ Buzzard,” she said. “As shortstop and second baseman, we always argue over who gets the ball, who gets the base, or who gets the pop fly. We battle constantly, but at the end of the day I love her and wouldn’t have anyone else play second.”

Away from sports, Abbie is a member of the Future Farmers of America, the National Honor Society, the Fellowship of Christian Athletes, and the student council. She will be one of four Valedictorians at graduation. In the fall, she will attend Oklahoma State University and major in Engineering.