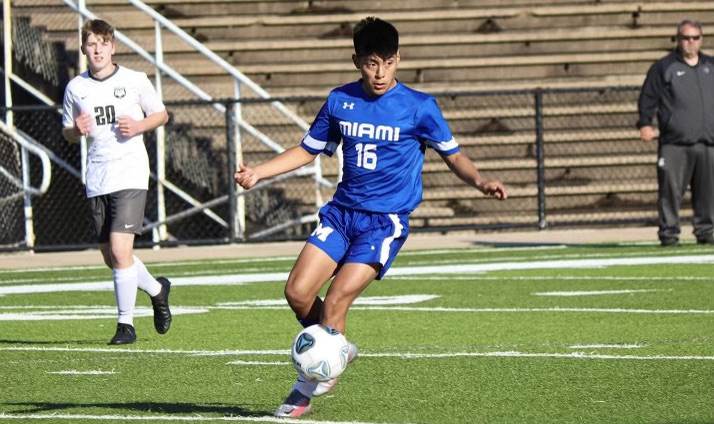 Almost every kid has dreamt of what they wanted to be when they grew up. Some may want to be a doctor or a lawyer, while others want to have a new type of career such as an influencer. But Jordy Andres of Miami has his eyes on a different goal that is a perfect fit for him.

“My dream is to become a professional soccer player,” he stated. “I have a lot of things that motivate me to work hard-God, family, my team-and to continue to improve while overcoming challenges to become the best version of myself to be able play at a collegiate level which will get me a step closer to making my dream come true.”

Andres is a sophomore at Miami High School. Along with playing soccer, he also competes in cross country and powerlifting. Throughout his life and athletic career, Jordy has had a number of people that he has looked up to and have helped shape who he will become.

“Some of my biggest influences are David Carr and Cristiano Ronaldo,” he said. “David Carr is a great influence on me due to how humble he is, his work ethic, and how he always gives his glory to God. Of course, my biggest influence would be Cristiano Ronaldo because of the passion he has towards playing soccer and how he’s been through so much such as poverty. Despite this, he has become one of the top players in the world. My role model would be my dad. He’s been at all my games since I was a little kid no matter what. He’s always wanted the best for me since I’ve started playing soccer and has watched me grow up with the game of soccer. He has never left my side and has always supported me no matter what. He is someone I will always look up to and hope to become one day.”

Andres also has some hardware to show for the work that he has put in. He was a 2021 Class 4A All-District soccer player as well as powerlifting regional champ and state qualifier in 2022.