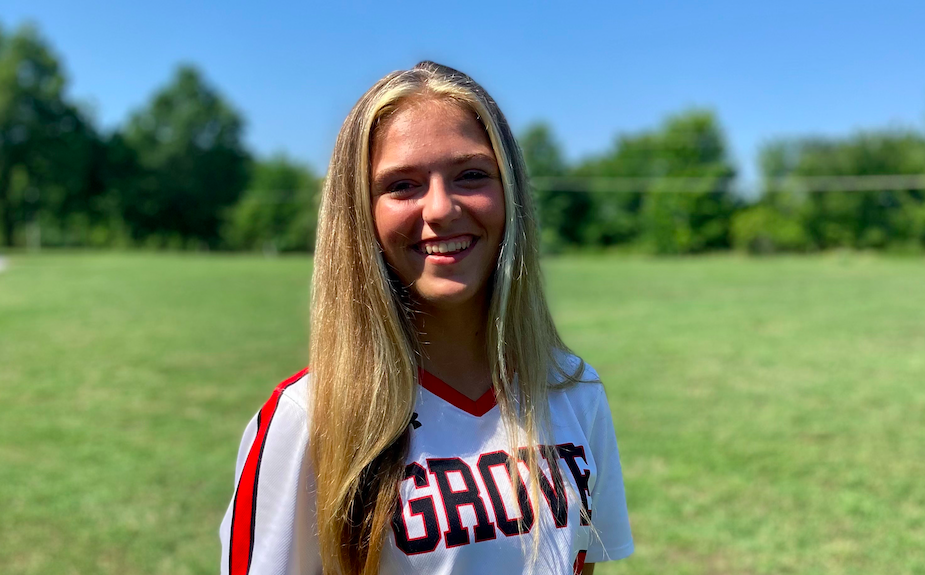 Holly Brice is a multi-sport athlete at Grove High School. She competes in both softball and soccer and says that while she enjoys playing, there are other aspects to the sport that she also enjoys.

“I play because I love the game,” Holly said. “I also enjoy making memories with my friends and teammates. I like being a part of a team and working together towards the same goal.”

Throughout her career, Brice has put in a lot of time and effort to become the athlete that she is today. But along with that work, came a lot of support from those around her that helped her through tough times.

“My parents, my big brother Zach, andy my teammates have been big role models for me,”she said. “These people have all been with me and supported me throughout my life. They push me to be better and to keep working hard.”

Another person that made an impact on Brice’s life was her third grade teacher, Tanya Tackett.

“I struggled with reading when I was younger,” Holly said. “But Mrs. Tackett believed in me and helped me believe in myself.”

The head coach of the Grove fastpitch softball team, Jeremy Collins, says that Holly is an outstanding teammate on the field and away from it.

“Holly is great kid both on and off the field,” Collins said. “She works hard and is always encouraging others. She is active in the local youth group and other activities at school.”

When it comes to opponents on the field, Brice says that there is one team that she and her teammates enjoy beating the most.

“The Miami Wardogs,” she stated. “They have always been a very tough softball team and I would definitely consider them our rivals.”

Along with playing for the Ridgerunners, Hollis is also a member of Oklahoma Team Genesis, a travel ball team she competes with during the summer. She enjoys being a part of both teams and she has great memories from both.

“I have a couple of highlight moments,” she said. “This summer my travel ball team placed third at a USSSAA championship tournament. Also, last season our Grove soccer team made it to the second round of state playoffs.”