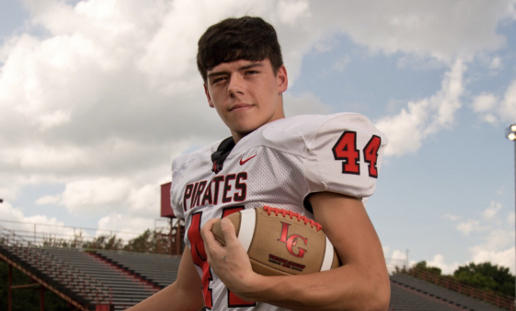 Locust Grove and Adair play for the 13th time and eighth consecutive season on September 8th. The all-time series is tied at six wins each.

The Locust Grove Pirates are coming off of a tough 2-8 season a year ago. But they enter this season with excitement and sixth-year head coach Adam Neff says that with the experience they have coming back, he is ready to see how they perform this season. “We have a lot of returning starters and young players have stepped forward to take leadership roles. We had a good spring camp. We saw a lot of growth from last year. We are looking forward to seeing what we can do after a rigorous summer.” Running back Chad Adams (6-0, 195, Jr.) had a solid year for the Pirates last season. He carried the ball for 793 yards and also added in sixty-eight receiving yards and looks to be a key part of the offense again this season. The Pirates have a stable of wide receivers, that will be led by Lane Atchley (6-2, 170, Sr.). He only played in three games last season but totaled 252 receiving yards in that short amount of time. Hazen Perkins (5-10-175, Sr.), Trevor Reneau (6-4, 180, Sr.), and Ricky Taylor (6-0, 185, Sr.) will be other receivers that will be called on this season. Taking care of things up front and anchoring the offensive line will be right tackle Chandler Smallwood (5-11, 285, Sr.), who had thirty-seven knockdown blocks last year.

On the defensive side of the ball, the Pirates will be focused on stopping the run and limiting their opponents’ big plays. Middle linebacker Kidman Rock Fleming (6-1, 180, Sr.) will be a big-time player in the defense. He registered eighty tackles, seventeen tackles for loss, one sack, one interception, and caused three fumbles last season. He will work to continue that impact this season. Playing alongside him at outside linebacker will be Adams and Taylor. Adams had thirty-five tackles and a sack last season, while Taylor added sixty-two tackles and two sacks. Working up on the defensive line will be Smallwood and Hunter Cunningham (5-11, 180, Sr.), who combined for thirty-four tackles, fourteen tackles for loss, a forced fumble, and a fumble recovery. Strong safety Perkins will patrol the secondary and work to keep the receivers away from the endzone. Assistant coaches this season are Bryan Ross, Andrew Gray, Danny Kelly, Trenton Rice, Bryce Means, and Tom Bond.