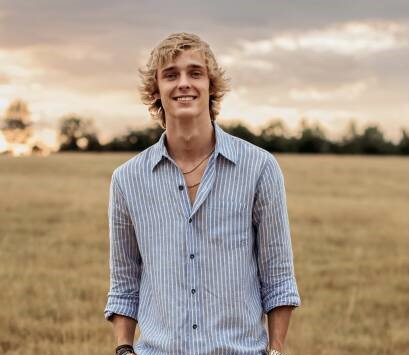 Jackson Kearnan competes in multiple sports for Grove High School. His love for sports is something that has been taught by two people in his life that have had a big impact on him.

“My dad and my coach have both been role models for me,” he said. “My dad tried out every sport just like I did but found his success in football. He played all the way through his sophomore year in college at Dartmouth when his body couldn’t handle the sport anymore. From a young age his story pushed me, both academically and in my own sport, to be the best I could be in order to achieve success the way he had. Coach Brumley has been involved in this sport longer then anyone I know and I can tell you that cross country and track are difficult sports. There’s always moaning and complaining from the athletes but he has always done a wonderful job of understanding and encouraging us to push through it and clearly has the desire to see us all succeed and try our best. His mentality about it all internally drives me to do better for myself, my team, and to prove to him it hasn’t all been a waste. I know he’d rather be hunting and fishing but instead, he’s using his time to mature and mentor young athletes. His selflessness is a truly admirable quality.”

Jackson is in his senior year and he runs cross country and track for the Ridgerunners. While he has the passion for his sports, he also has had to invest a lot of time to be his best.

“It takes a lot of hard work and determination,” he said. “Practices are long, hot, and sometimes as early as 5:30 a.m. Kids everywhere are training in the same conditions, and finding success comes down to who wants it more, and who’s willing to work harder for it.”

Along with being involved in athletics at Grove, Kernan is also a part of groups around campus. He is a member of the student council, the Interact Club, the National Honor Society, Class Council, and the Junior Bank and Hospital Boards.